I have had a holiday, and I'd like to take it up professionally.


I'd not been on holiday for near on 5 years, so when i decided to go on one, as you can imagine, i was ready for it. The reason i worked on my dads market this summer was to save money so that i could go away. I went with my friend Sarah, we don't know where we wanted to go, we just knew we wanted somewhere all inclusive, somewhere hot and somewhere cheap. The place that perfectly fit this bill was Turkey. We booked to go to a little picturesque mountainous part called Ovacik near Fethiye and Hisaranu. We didn't fancy going somewhere too built up, touristy and commercialised so Ovacik was perfect.

We didn't arrive until about 4am in the morning so we didn't get to see much of our hotel, our room was pretty small, but since we only intended on sleeping and showering here we wasn't too bothered, it was clean and at that point that's all that mattered. We got up the first morning (about 4 hours after going to bed) to glorious sunshine and went for breakfast. This was one of very few times that we got up for breakfast, not necessarily because we are lazy but being a Muslim country they don't have sausages and bacon and stuff, so, for me, it was basically just toast ... although there might have been a little truth in the laziness reason, sleep definately trumps toast! The gardens and the pool area of the Destina hotel were beautiful, and the mountainous veiws were something else. That first day me and Sarah had a Turkish bath, we were exfoliated, foam massaged, and then had a face mask and oil massages. The massages were glorious, the Turkish bath part was nice although i must admit i'm wasn't keen on it being performed by a middle aged Turkish man. At one point i was laid there thinking 'arghh that exfoliator mitt is going a bit high up the thigh!' and 'yeah i think you've exfoliated my cleavage enough there love' ... the bloke was pretty harmless mind and i think i'm just that little bit of a prude.

Sarah and I are quite big fans of the vodka which is why we went for the all inclusive option, we thought even if we didn't really like the food we'd save a small fortune on the alcohol. So that first night we went to the bar for our first vodka, then i popped to the bar for a second, still drinking the first while walking past the bar Sarah decided to grab a third, i went for a fourth, this carried on since we were aware that the bar shut at 11pm and we didn't want to have to buy our drinks, we thought getting a stash in was the way to go ... BIG mistake ... one minute i went 'i'm not really feeling this vodka' and the next i'm being escourted up the stairs to our room by a Turkish man concerned with my ability, or lack thereof, to manouvre them. We were in bed for midnight, and a few hours afterwards i was that little bit sick, and Sarah was sick all the next morning, so i was lucky in a way, that i wasn't too bad the next morning. We learnt a lesson, foreign vodka is lethal! Needless to say the next night we stayed tea total and the nights after that we were a bit more cautious with the vodka!

A few days in we did the 12 Island or 'Cruise the Blues' tour. We got to stop at 4 small islands for a swim in the sea, which i loved, i love the water, i'm definately a water baby. But admitedly while swimming i was thinking of that poor bloke that got eaten by a shark on his honeymoon. We were pretty far out at sea, there must have been alsorts of creatures of the deep below our feet ... i made sure i swam near people that looked much more like shark bait than me, ahem, meatier people <3 and made sure my legs weren't down the deepest, swimming with my feet quite close to the surface .... my dramatic mind coming back into play it seems! Sunbathing on deck was gorgeous, there was a lovely breeze to make the intense Turkish sun more bareable. There was a weird photographer man onboard though that made me and Sarah pose for awful photographs on deck and then tried to get us to go back in his car after for a 'tour of his city' instead of on the coach with everybody else, like that was happening!

Even though i don't really have anything other than praise for the country, it is beautiful, one thing i wasn't keen on was the toilets, in Turkey you are not allowed to flush toilet paper down the toilets! How warped is that?! Why don't they build a few less hotels and sort out some proper sanitation? I was so glad i was sharing wth Sarah and not a boy, a boys toilet habits would not have been welcomed in my hotel room for sure! Not flushing toilet paper down the toilet was a hard habit to get into i was often going 'ooops i went all English' .... and lilos ... wtf is wrong with lilos! I thought i was dying blowing mine up, it took me one night and one morning to do, i was seriously contemplating just throwing the deflated bit of green plastic in and seeing what the chances were of me floating on that, i'm lighter than i used to be and everything! .. tip .. buy a ready blown up one.

One of the most memorable moments involved a wasp. If you know me you will know how petrified of the things i am, i once queued for almost an hour for Oblivion at Alton Towers only to run back out of the queue, weaving through people being chased by an evil little wasp. I don't do the ridiculous 'stand still and it'll go away' malarky, i do the run like a maniac so it gets away from me malarky .. and i have to run in a sporadic twisty turny way to confuse it. Anyway, Turkey wasps are big daddy wasps, i swear, near on the size of my fist, ahem, kinda. One evening we came back after a hard days sunbathing by the pool only to find one sat on our bathroom light staring at us. After freaking out like girls and a 10 minute discussion on how to get rid of it so that we don't have to sleep in the coridoor we decided the best thing to do was to arm ourselves with a lilo each and throw a flip flop at it. Sarah threw the flip flop (my flip flop) missed the wasp entirely, but of course didn't manage to miss the toilet. I'm sure the wasp was laughing at us. We'd opened the main room door hoping if we did get it to move it would fly straight out when a maid walked past to see two hysterical English girls hugging lilos as if they were a coat of armour. This maid spoke zero English, so, after a few minutes of us miming wasp (speedily flapping our arms and buzzing) she went 'oh', grabbed some tissue paper, and casual as anything killed the wasp and put it in the bin .... that night ... we were scared of the bin.

I don't know whether any of you have ever been to a Turkish market but it's an experience i recommend everyone have. It's so funny. In Turkey they have no copyright laws so the markets are full of 'genuine fakes' they do look very good, Louis Vuitton, Mulberry, Christian Dior, they have them all, and they try everything in their power to sell them to you. Giving you apple tea, flattering you, taking you by the hand and physically dragging you into their stall ... some of the lines they come out with are amazing 'cheaper than Primark!' 'cheaper than Poundland!' 'Cheaper than stealing!' 'Come and get your quality crap' 'as good as off the back of a lorry'. Sarah became 'J-Lo' and me 'Shakira' ... yeah i'm still a brunette, i think these were the only Western female celebrities that they knew. One was selling underwear and was shouting at me that i could get my 'big knickers' off him .. i think telling him i didn't wear knickers was a mistake though since i was trying to dissipate his attentions. It was a funny morning tbf, not for the meek though.

The last day we got a bit cultural and went on the Dalaman tour, we got to see the tombs where they used to bury the royalty, they were magnificant ... we also got to see giant sea tutles being fed .. i would quite like one of these as a pet ... i have a bath. We got to have a mud bath also, i can't quite decide whether i liked this or not, it was bizarre smearing yourself in mud then sunbathing until it set ... but my skin did feel pretty soft afterwards.

All in all it was a fabulous holiday, i enjoyed getting away from it all and me and Sarah had a laugh. Turkey is definately somewhere i'd visit again, probably to the same area, i don't fancy the lively resorts. I've got a nice bit of colour ... even if it is mainly the freckles! and the rest from working was sorely needed. Miss me?

a bit of pictorial eveidence that i actually went: 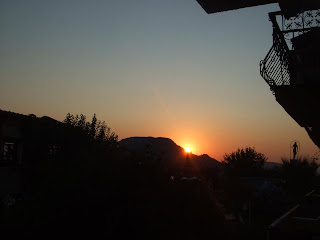 View from our balcony every evening at 7pm 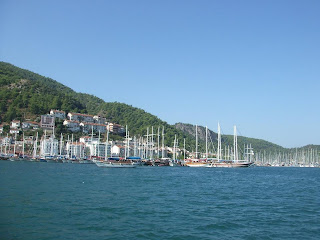 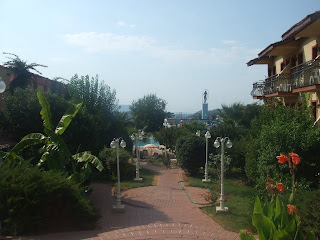 The walk from our room to the pool 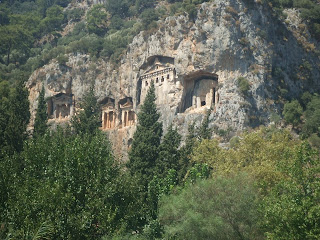 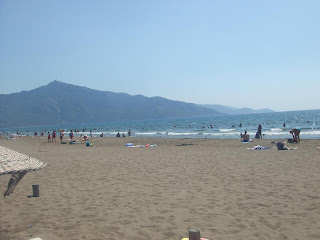 Turtle Beach﻿
Posted by A Mirrored Pool of Thought at 12:14